WEST JORDAN — Two years ago, when a teenage girl was hit and killed at a TRAX crossing in West Jordan, neighbors demanded better safety.
In June 2011, Shariah Casper and her cousin were crossing TRAX at 3200 West and 8600 South. The Utah Transit Authority was testing its TRAX trains on the line at the time.
After an eastbound train went by, Casper stepped out to cross the tracks. She never saw the speeding westbound train that hit and killed her.
Casper's death helped further the process of finding a safety standard for rail and pedestrian crossings.
"Every accident plays a role in our continuous improvement of pedestrian safety," said Todd Provost, with UTA's Engineering and Project Development department.
Ultimately, UTA decided to upgrade not only that deadly rail-pedestrian crossing at 3200 West and 8600 South, but all similar rail crossings system-wide.
"We were not happy with the pedestrian crossing standards that were out in the industry," Provost said. 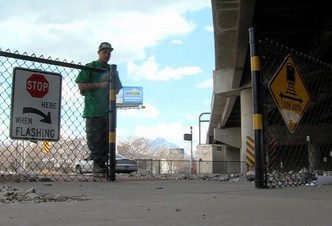 
Other accidents where people were injured.

SALT LAKE CITY — An accident involving a car and a TRAX train caused delays in downtown Salt Lake City Wednesday afternoon.
A car was hit by a TRAX train near 100 South and Main Street around 12 p.m., according to Utah Transit Authority officials. No injuries were immediately reported in connection with the accident.
UTA officials said that commuters should expect delays on the Green Line heading west to the Salt Lake City International Airport.
More information will be posted as it becomes available.
Read more at http://www.ksl.com/?nid=148&sid=29704138#51x77Khg1CZiZOFC.99

This story was originally published Nov 05, 2013 at 11:59 p.m.
MIDVALE — Three people were injured Tuesday night when a TRAX train crashed into a train car that had become separated from another TRAX train near 8100 South and 100 East.
Utah Transit Authority spokesman Remi Barron said the conductor of the oncoming train spotted the lone train car and attempted to stop but was unable to do so in time. All of its lights were out, and the operator didn't realize anything had been left behind.
The subsequent collision injured a TRAX operator and two passengers, but none seriously. Barron credited that to the slowing of the oncoming train.
UTA is conducting an investigation to determine what caused the train car to separate from the first train, Barron said.
It was unclear how long the car was sitting on the tracks before it was hit — the operator may not have even been aware of the problem — but TRAX trains usually travel about 15 minutes apart, Barron said.
Wednesday morning TRAX northbound blue line experienced 15 minute delays as a result.
Update: Nov. 13, 2013
UTA released the following statement about this accident:

A cause has yet to be determined for the TRAX accident that occurred on the Blue Line on Tuesday Nov. 6 at approximately 8100 South in Midvale. The collision resulted from the last car of an out-of-service TRAX train becoming uncoupled. This kind of incident is extremely rare, and UTA is conducting a thorough investigation to determine what caused the TRAX cars to uncouple.
UTA is working with the vehicle manufacturer on the investigation, along with the Federal Transit Administration and the Federal Railroad Administration. The coupler on the vehicle in question will be completely dismantled and inspected in an effort to identify any mechanical or electrical issues that may have contributed to the incident. With no initial determination of cause, this is likely to be a time-consuming process that could take several weeks or even months to complete.
Safety is UTA's number one priority. Each TRAX vehicle is thoroughly inspected each day, and UTA is committed to making sure all safety policies and procedures are followed to ensure the safety of our riders and the public.