The Lucin Cut Off a freaky kind of bridge. 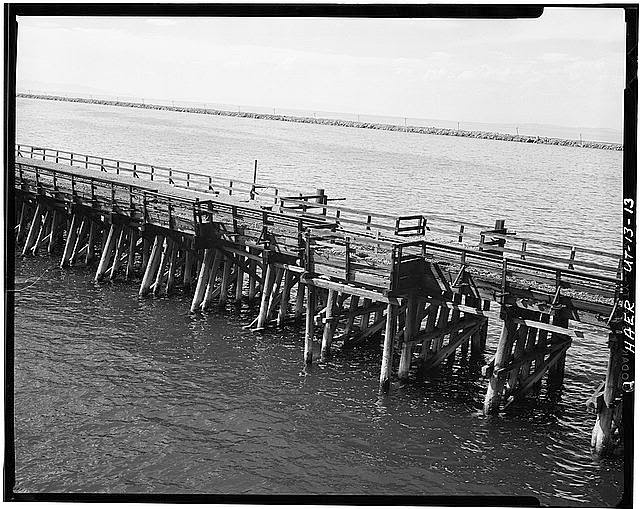 Celebrating the day 112 years ago when construction started on the Lucin Cut-off the bridge across The Great Salt Lake.
I'm compiling these chapters of my book "Death At The Station".  I've found so many interesting things to share about how difficult it was to build this cut off.
The cut off was proposed to save money by avoiding the Promontory Mountains, where the grade was steep and there were many curves making it difficult for the trains.  They had to be broken apart and each section had a helper train that would take it through the curves and to the other side.
The cut off was 46 miles shorter than the route through Promontory Mountain but the most significant saving was time.   Any where from 6 to 12 hours could be saved with the cut off.
$61,000 in operating costs compared to the same month in 1903.  The cut-off would pay for itself in  eight years.

Several places in The Great Salt Lake had black holes that seemed to be insatiable.

Bear River Bay on the east side of the lake is where fresh water mixed with the salt water of the lake.
The Bear River drains into the bay and filters into the lake.  A tressle was built to cross this bay.
While filling in the piles at the eastern arm of the lake, two pilings (70 foot long logs) one one top of the other were driven into the lake floor and disappeared.  The lake at that point was less than ten feet deep.  In Bear River Bay, over one hundred feet of sand, salt and silt, something other than the solid bottom that they needed,  had collected .  It seemed no amount of fill would ever be enough to stabilize the bottom of the lake here.
During this stage of construction the tracks in this section settled continually, each time being built back up again.  The fill material was coming from a site on the lake's east shore, just west of Ogden, Little Mountain.  It was said by the newspaper, that Little Mountain, Just keeps getting littler.
The continuing settling of the tracks created momentousness problems.  December 10, 1902 the newspaper reports "Sixteen cars and one engine dropped into the water. . . this occurred in the same place where similar accidents have happened so many times before.  No one had lost their life. . . . yet.  For weeks the ballast train has been dumping hundreds of carloads of rock in an effort to make the track solid enough to sustain the heaviest loads.
On March 26th, 1903 As the result of the continual sinking of the Ogden Lucin cut-off, an engine went under.  The track settled over night, the engine started across, when it reached the soft spot the heavy engine lurched and then dropped falling over on its side and settling.

In April 1903 another larger sink hole was found west of Promontory.  This is where the Rambo Station was suppose to be constructed.
On April 3, 1903, five hundred feet of tressle work gave way.  Four cars of gravel and an engine were precipitated into the lake.

In October of 1903 it was reported by Scientific American that the principle trouble was in two main areas comprising nearly ten miles in all.  It was said Rambo had consumed 2,500 tons of rock everyday for a month without showing any significant change in depth.  By the time Rambo finally stabilized, it alone had consumed 70,000 carloads of rock.  In the end, the section at Rambo proved to be too unstable for an embanked roadway and it was bridged by extending the trestle a mile on its western end.