The Crash That Changed the Laws 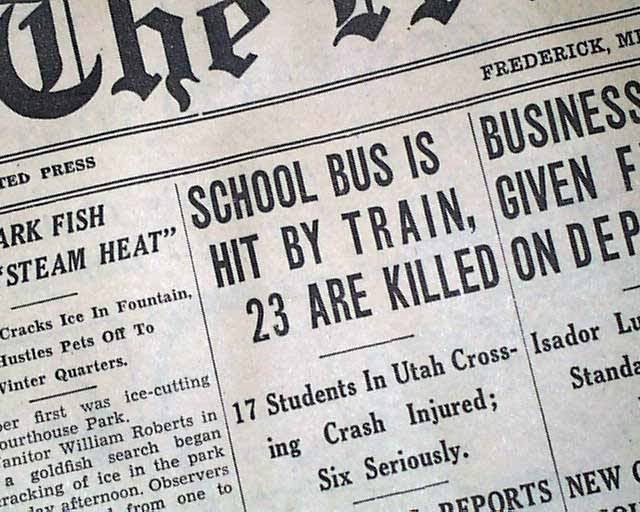 Salt Lake City Dec. 1 1938
A Denver, Rio Grande and Western Railroad freight train traveling at almost a mile a minute through a snowstorm smashed into a school bus at a grade crossing near here today, killing 22 school children and the driver and injuring 17 other children, some critically.
Not a single person of the 40 on the bus escaped injury of death in Utah's worst traffic tragedy.  The accident occurred at a crossing near Lampton, 15 miles south o Salt Lake City.
The highway parallels the railroad ad then cuts across the tracks at this point.
Harold Silcox, driver of the bus carrying the students to the Jordan high school, stopped his bus at the crossing and then went onto the tracks.
The train, bearing down on him at 52 miles an hour, struck the bus in the center, crushed it and carried the wreckage several hundred feet.
The bodies of some of the children were entangled in the running gear of the locomotive.  While the exact cause of the crash probably will never be know, it is likely that in the swirling snow Silcox had neither seen nor heard the approach of the west-bound freight.
A dozen ambulances were summoned to carry the dead and the injured to the Salt Lake City General hospital.  It was here the full impact of the tragedy was felt as the parents and relatives of the children gathered to identify their dead and comfort their injured.  Some of the children were crushed so severely they
could not be identified and their names were obtained only by comparion of the school rolls and a check of those who started for classes.
The arduous task of making a house-to-house canvass of this district will start tomorrow.  They said such a check was the only means of determining definitely the number and identification of the dead.
Several of the children died en route to the hospital or after they reached there.
Twenty other children, had been on the bus earlier in the morning, but a few minutes before the accident they had left the bus to enter the Riverton Junior high school.
Rail officials, through W. E. Speakman, said they were confident the train crew was not responsible or the crash.
They said the train's speed of 52 miles an hour was "normal" and the engineer sounded his whistle as he approached the crossing.  There was no obstruction at the crossing which would interfere with the driver's vision.
The railroad officers said a formal investigation probably would start tomorrow.

Salt Lake City, Utah
A fast freight train "The Flying Ute"  crashed into a loaded school bus near here today, killing 26 and seriously injuring at least a dozen others.
W. E. Speakman, . . . .said the 26 dead had been counted.  The bodies were taken to mortuaries thruout the city and attempts were being made to locate relatives to assist in identification.

Sarah Bergstrom, business superintendent of the Salt Lake General hospital, said she personally aided in the recovery of 18 bodies.  Estimates of the number of persons on the bus ranged from 40 to 60.
The crash occurred at Midvale, a small community about 10 miles south of Salt Lake City.  A snow storm that started during the night reduced visibility and made the highways slick.  The crash occurred at a rural grade crossing.  The students were enroute to their classes at Jordan high school.
Salt Lake County Sheriff S. Grant Young ordered all deputies to the scene.

Railroad officials said the train was an hour behind schedule because of the weather.
Young said the frame of the bus was rammed underneath the engine and dragged down the track.  He said slowness in determining the number of dead resulted from difficulty in getting beneath the engine.
"There probably are bodies lodged under their"  the sheriff said.
Doctors and Nurses from all surounding towns were recruited.
Driver of the bus was Farrel Silcox.
At Salt Lake general hospital  Dr. Lionel W. Sorenson said seven of the 1 children taken there "are in an extremely critical condition."  The students ages ranged from 14 to 18 years.  Most of them are children of farmers.

The accident occurred in a rural area over a mile from telephonic communication.  This made a quick survey of the death toll and injured list impossible.  All children taken to the hospital were reported unconscious but alive."
It was the worst school bus tragedy in Utah history.
The children were picked up by the bus at Bluffdale, Riverton, South Jordan, Crescent and Herriman, all small communities south of Salt Lake City.  Silcox was believed to have been unable to see the approaching train because of the sleet.  He was among the 1 injured taken to the hospital.  The cab of the bus was tossed to one side, about 100 feet from the crossing.  Bodies were strewn every where for a quarter of a mile down the track.
"Grief stricken parents, hysterical and weeping, rushed frantically up and down the 85 car train, trying to find their children,  There were 12 ambulances at the scene an hour and a half after the tragedy."

"I got on the bus at 8:30 about two miles from the crossing.  I think there must have been about 40 others in the bus with me.
"When we came to the crossing, we stopped and Mr. Silcox, the bus driver, started u again.  I was sitting in the very back in the center but I couldn't see much because of the snow.
I thought I heard someone yell 'train!' then I saw something black coming from the right and then it hit us.
When I woke up I was lying in the snow near the bus.  Two students I knew, Mack Bateman and Mabel Smith, were nearby Mabel was lying near the bus and Mack was lying by a fence.  I guess the;re all right now.
There was an awful lot of screaming and moaning.  They were all just kids 15-18 years of age.
And then they came and brought me to the hospital." 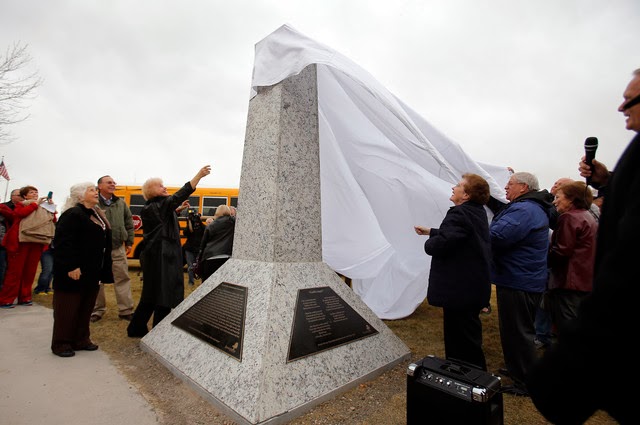 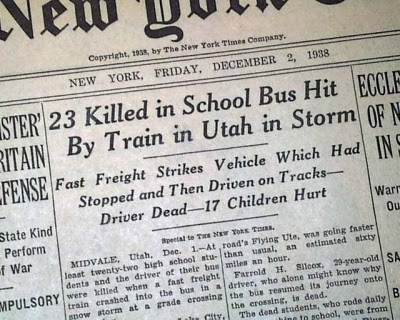 The hospital was jammed with parents father wept openly and mothers were screaming.  Attaches had to set aside a special room for person who fainted.  One entire floor of the hospital was filled with crash victims.

Last Dec. they remembered this crash that happened 75 years ago.  There are still people alive that remember that crash. Here are some links to more of the story.
http://www.deseretnews.com/article/705338209/Bus-crash-in-1938-led-to-train-laws.html?pg=all

A monument was erected to remember those who died in that Train VS Bus crash.

http://www.deseretnews.com/article/865591696/Victims-of-school-bus-train-crash-remembered-75-years-later.html?pg=all
Posted by At the station at 8:28 PM